“Everybody is different in what they want to transmit, their message. Some people want to convey some good time that they enjoy, or some people do it because it’s cool, but the point is that each person has their reasons. I think, for those who become serious about music, they are the real rappers. For those who dropped out along the way, maybe they just wanted to show off.”

I interviewed MCfrog on the day of a 6.1 magnitude earthquake in Osaka that woke everyone up at 7:58 AM and stopped the trains for the rest of the day. My tenth floor Namba hotel room shook for nearly sixty seconds and literally threw me off the bed. After frantically gathering my things and running down an emergency exit staircase with loads of screaming Chinese tourists, I headed out into the Osaka morning and met MCfrog at a curry restaurant in Nishishinsaibashi to talk about her rap career and the Osaka hip-hop scene. 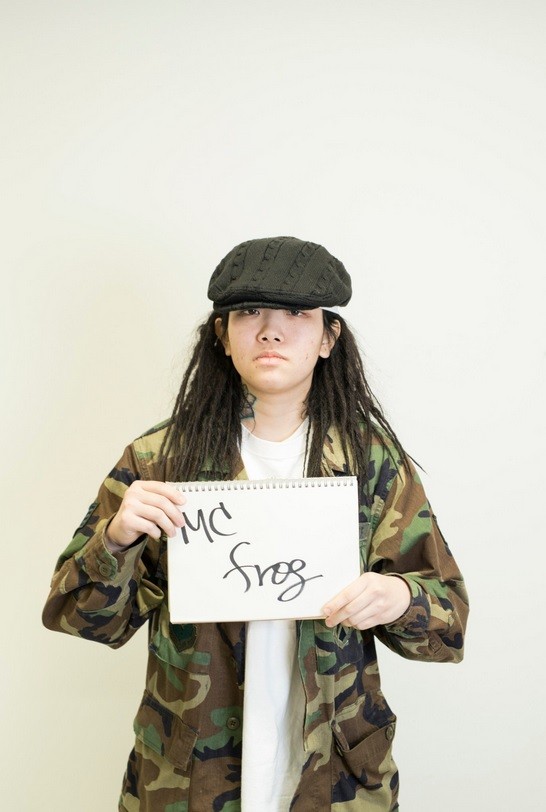 MCfrog is a twenty-two year-old rapper from the Hagashinari Ward of Osaka, located east of the city center. She first heard about hip-hop through her mother, who would play a variety of different musical genres in the house. Growing up, she was always listening to mostly Lauryn Hill, Beastie Boys, and Cypress Hill. MCfrog is mostly known as a battle MC, but also composes music and “would like to be a rapper that can do both.” When I asked her what she likes to talk about in her rhymes, she told me that she mostly raps about her bitterness in not having achieved her dreams yet.

MCfrog told me that the current Osaka hip-hop scene is really hot right now and it is very unique with lots of strong characters and cool MCs. The main MC Battle event in Osaka is called Enter, which is held once every three months and, if you win in the top three, you can move on to an event called Spotlight, which is the grand championship. 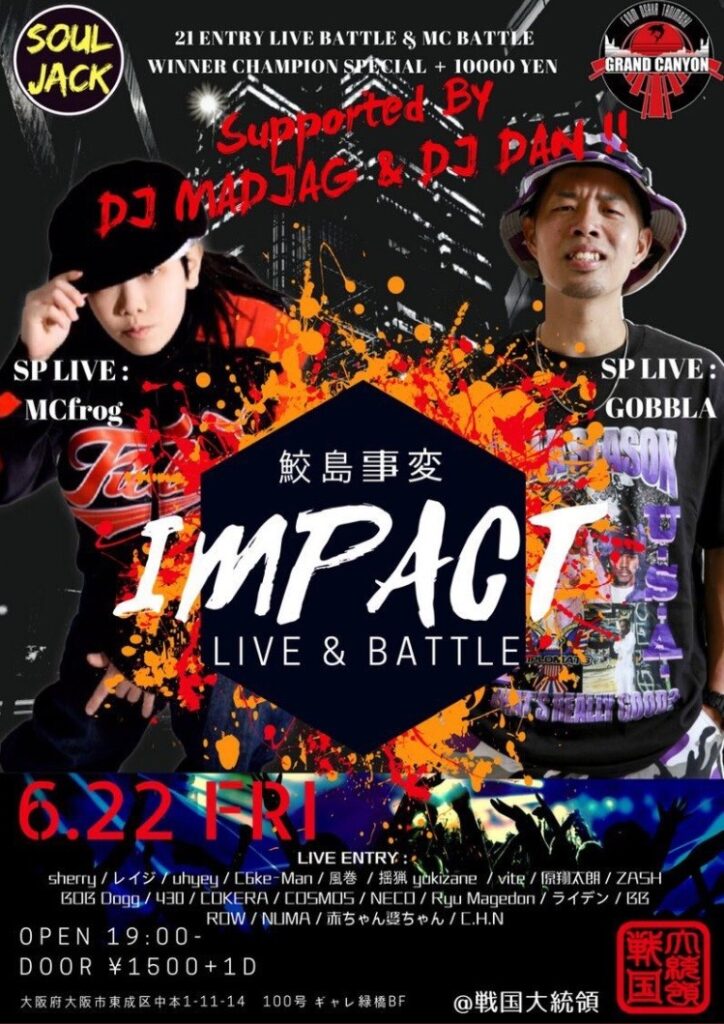 MCfrog confirmed that there are some other female MCs in Osaka, but not many that are very active. She said that, at first, the other MCs treated her like she was “the female rapper”, but, after keeping at it and never budging from what people say, she doesn’t feel uncomfortable at all. MCfrog received help from the east Osaka hip hop crew, NFMCS, who she says, “have taken care of me a lot and they are the people who are taking care of the humanities. Given the scary image that hip-hop has sometimes, those people are working to turn that image upside-down.”

When I asked her to tell me about a female MC in Japan that we should celebrate, she suggested Fukuoka-born MC, Tsubaki, who is now living in Tokyo. We’ll cover more on Tsubaki later on the list. She also told me that one of her current favorite Japanese MCs is Chinza Dopeness and she likes his style of music.

You can find more of MCfrog’s music on Youtube, at Castle Records in Tokyo, and you can buy her second EP, Find the Street, here. You can also keep up with her on Twitter.

Listen to my interview with MCfrog here, with interpretation help from Junko Takahashi.

(MCfrog)
Don’t take it wrong, fun and courtesy.
A quick fix will become a shame and I roam
Wherever I go, same mistakes
This stage is not that easy.

Just a mouth that asserts anything,
Cheap spirit and motivation, that is not enough.
Only a pretense, the words are light,
I don’t want even a bit of such collusion.

Time limit doesn’t give me a time to choose.
Impending, will go insane.
When it becomes complicated, try to escape immediately.
View the negative race cycle as dangerous.

The stage, to show my potential,
From this place, I can go up anywhere.
To show the hope, limitless,
Do or do not, will be a friend or foe tomorrow.

I chose this from many,
Think carefully. Take action, this site.
Too many players to sweep and throw away,
See to let them live or kill and cut off the chain.

Ordinary is not any different from general.
Social reform, a maverick, an extreme, a worthless rascal.
Find your value, polish yourself,
No mercy, until the day that we meet at the high point (stratosphere).

(Tsubaki)
Do not touch, danger, it’s scary if you lick it.
There is not a tepid awareness, nor a sense of crisis.
Try furiously and sometimes a poor shot hits,
A suspension bridge of dream, check your steps.

Blindly nervous, open microphone,
As soon as I get off (the stage), flattering, boring.
Preach needs love.
If not, using armed force, dragged out and cross-examined.

Mouth is evil, I am fully aware of it.
Disgorged poison and virtue fall upon.
Your problem resolver is not helpful.
At last, what is questioned is my own value.

Sowing, watering, growing lyrical,
Shine with the inner growth,
Don’t misunderstand the meaning of being selected and standing here.
If you just want a flower, go to some other place.

I chose this from many,
Think carefully. Take action, this site.
Too many players to sweep and throw away,
See to let them live or kill and cut off the chain.

Ordinary is not any different from general.
Social reform, a maverick, an extreme, a worthless rascal.
Find your value, polish yourself,
No mercy, until the day that we meet at the high point (stratosphere).