The Spirit of Gurdjieff Lives on in Two Guitars

Bert Lams has come to recognize the look. It’s the one he receives when audience patrons think they know what is in store once he initiates a concert with fellow guitarist Fabio Mittino.

“It’s funny,” the Belgian-born Lams remarked. “Being a guitar duo brings a connotation for people that what we do is always going to be about ‘guitar music.’ They expect to hear flamenco, Spanish guitar music or some kind of virtuoso music. What we do is totally the opposite of that. 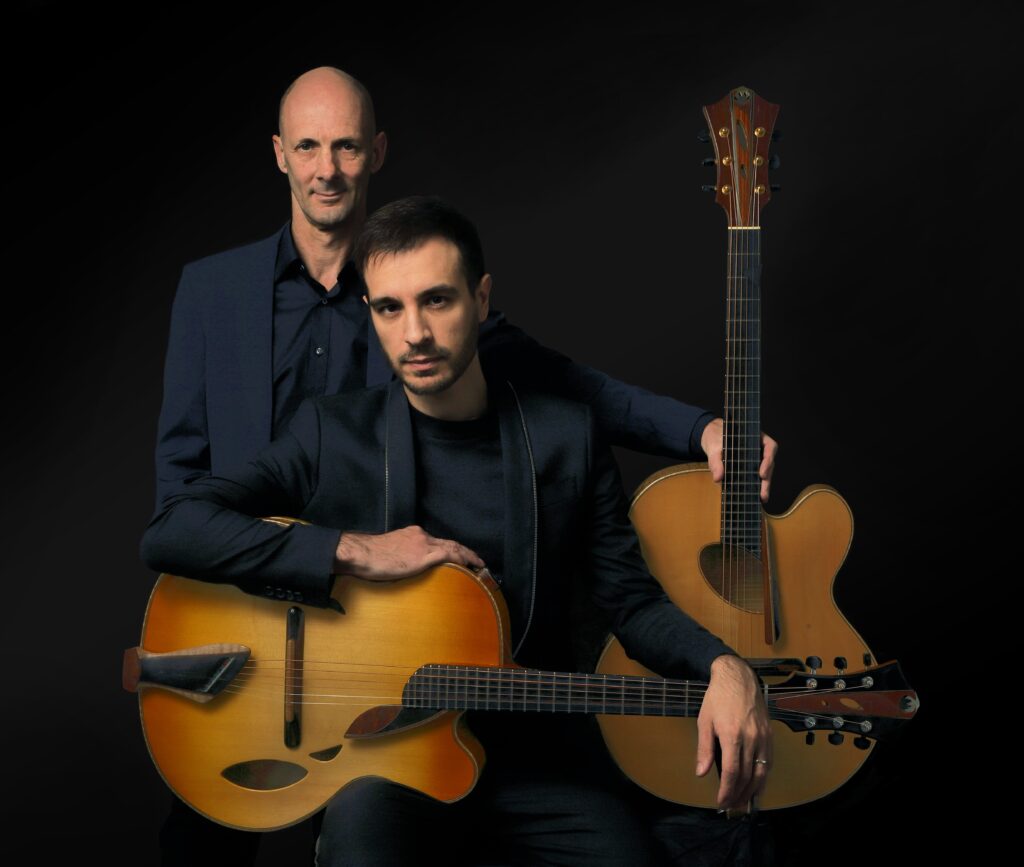 “You’ll see it when we start our first piece. You can see the surprise on people’s faces. They have no idea. ‘What is this? What are they doing? This is not what we expected.’ I enjoy that because it still draws people in, but in a different way, from a different angle. A lot of that has to do with where this music comes from. It was created under special circumstances in difficult times. It is very spiritual music with a lot of folklore elements mixed in.”

The Gurdjieff connection
What distinguishes Lams and Italian guitarist Mittino from other duos and ensembles – even the celebrated California Guitar Trio, which Lams has toured and recorded with extensively for nearly three decades – is the source material. The core of the duo’s repertoire revolves around G.I. Gurdjieff, a journeyman whose music was as diverse as the many occupational hats he juggled.

Born from Russian, Armenian and Greek descent, Gurdjieff was, at various times, a merchant, author, philosopher, spiritual teacher, mystic and more. He wasn’t a composer in any traditional sense. Instead, he absorbed songs, melodies and meditations throughout travels in Eastern Europe, Asia and the Middle East in much the same way ethnomusicologist Alan Lomax did in collecting tunes of mid-19th century folk music in rural America.

Lomax preserved the music he found through field recordings. Gurdjieff stored what he heard in his head, then hummed or plucked out single-string recitations on guitar to one of his most trusted proteges, Russian composer Thomas de Hartmann. Much of that music was then “composed” for piano. What Lams and Mittino did, at the latter’s suggestion, was rework it for two guitars.

“Gurdjieff was not a musician,” Lams said. “Still, everything he touched turned to gold. He could sell carpets at the market early in the morning. He could open a restaurant. He was a great businessman, but was also a teacher. He wrote books. He could kind of do anything he wanted, really.

“His father was a professional storyteller. I think that’s where the nature of this music comes from. His father had it in his blood, that oral tradition. He did not write any of these stories down. They were passed on from one person to another. That was his job. I think Gurdjieff inherited some of that gift.

“When he went on his travels, he was able to somehow memorize these melodies and hum them to de Hartmann. There were Aremenian songs, Egyptian songs, Syrian songs. There were these different songs from all over the East. We play a lot of those.”

Movimenti
So what does the resulting music sound like? Well, on “Movimenti,” a newly released second album of Gurdjieff/de Hartmann music by Mittino and Lams (the first, “Long Ago,” came out in 2016), the guitar sound is subtle yet exotic with a strong Eastern accent. It is delicately dance-like but powerfully emotive. And short. The duo glides through 11 compositions on the recording in under 20 minutes.

“Yes, these are short pieces. Most of the ones on the second album are designed for movement. There is sort of a dance choreography that Gurdjieff came up with. Fabio and I experienced this last summer. We were invited to Greece to play for participants at a ten-day seminar where they studied these movements every day. They kept repeating these pieces as they studied the movements. Some were repeated for half an hour. Most were played on piano and were played a lot slower.

“Since we’re guitar players, we make this music more of an adaptation for the guitar. It just seems to sound better when it’s played a little faster on the guitar. On piano, you can play one note and it can ring forever. Not on guitar. On guitar, the note is played and it is over, so we have to kind of play it a little bit differently and adapt it somewhat. That’s why most of those pieces are played faster.

“This music is like a painting. It takes me to a place, but I think it also speaks to people in a way that is simpler, a way that is more innocent, than Gurdjieff’s teachings. Even if people don’t know anything about the music, you can tell that it speaks to them when we play it. You can tell that there is something that touches them in the melodies. There is a lot of emotion in this music, a lot of longing.”

Enter Fabio
Lams’ journey to Gurdjieff landed him in two countries before the alliance with Mittino began. In 1987, Lams made his first visit to the United States to take part in a course called Guitar Craft overseen by King Crimson founder Robert Fripp. The studies took him to Claymont Court in West Virginia, a mansion that was (and still is) home to the Claymont Society, which offers retreats centered largely around the teachings of Gurdjieff.

While Lams was focused on Guitar Craft, the Claymont Society and the grounds it called home remained a profound inspiration for a young guitarist just getting introduced to America. Ironically, Lams and Mittino will perform at Claymont Court only two nights after a January 15th concert at the Kentucky Coffeetree Café in Frankfort.

“That’s where it all started for me. It was a big thing, coming to America for the first time, not knowing what I was in for. This country changed my life. Now I live here and work here.”

But it was while residing in England that Mittino entered the picture. Hoping to also become a Guitar Craft student, he reached out directly to Fripp. While courses at the time were unavailable, Fripp referred the Italian instrumentalist to Lams for lessons. That led to an extended friendship, professional alliance and a fascination with Gurdjieff. 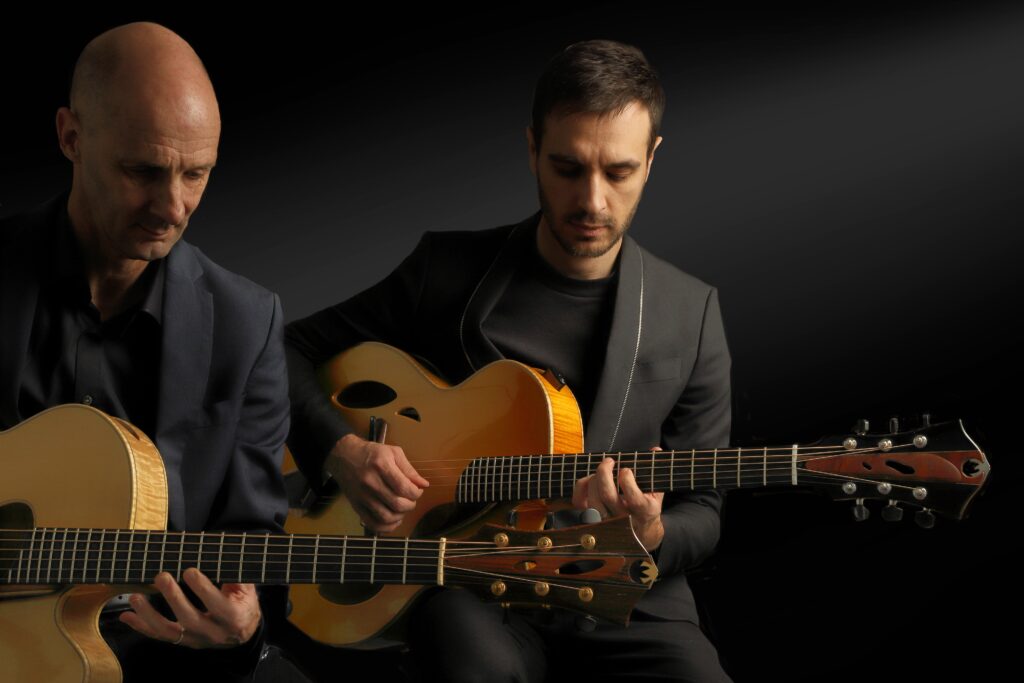 “Fabio is about 20 years younger than I am,” Lams said. “He is actually the one who instigated this whole project on the music of Gurdjieff because he had already been arranging it for solo guitar. He made an album of the music and asked me to write something in the liner notes. But I think he felt it would sound a lot better in a duo because some parts were missing with one guitar. That’s when he started having the idea of playing this music with me.”

Gurdjieff in the house
The majority of the performances during the brief tour Mittino and Lams are undertaking this month – a series of nine shows in ten days – are house concerts. The Frankfort outing at the Coffeetree Café, where Lams has played several times before with Mittino as well as with the California Guitar Trio, is one of the few exceptions. But the café’s atmosphere, he said, very much possesses the proper living room atmosphere.

“The house concerts are a perfect situation for this music, because they are very intimate and very much like at the Coffeetree where people are in a smaller space. They’re close by, close up. There is no division of stage and lighting system and sound and all that. We’re in the same space, so we hear what the audience hears and they hear exactly what we hear. Normally, when we do a regular concert with the trio in a larger room or a theatre, for instance, you’re in a separate space than the audience. It’s much easier to connect with the audience with a house concert because you’re right there in the same room.

“The house concerts are like heaven for me. When there are just 20 or 30 people there listening closely to you, it’s special. It’s special every night.”

Fabio Mittino and Bert Lams perform at 7 p.m. on January 15th at the Kentucky Coffeetree Café, 235 W. Broadway in Frankfort. Admission is $20. Call 502-875-3009. For reservations, go to www.kentuckycoffeetree.com.