Scene&Heard: This Was What They Wanted

I was 18 when I bought my first Leonard Cohen tape and slid it into the car stereo of my Dad’s old Buick. Was This What You Wanted? began to play, and the whole world of one naïve Catholic Italian girl from Buffalo changed.

Music has that power, and that whole tape of the album New Skin for the Old Ceremony had a powerful influence on me as an audiophile. Lyrics suddenly became the most important part of a song, and Cohen was certainly one of the great sages of lyrical construction.

On the night of the election when I opened my newsfeed and learned that the great poet had gone to his reward, as my mother says, I felt an immense grief. I had to do something.

My simple Facebook suggestion to put on a show in tribute to Cohen resulted in a rapid response from musicians in town interested in getting involved. Clearly, so many of the local musicians I admire were as brokenhearted as me over the loss of this great, influential artist.

So, I found myself organizing a Leonard Cohen Tribute at The Burl, where my friend Bryan Minks gave us a Monday night to simply have a stage where we could pay tribute to a man to whom we all felt a strong musical connection. We decided to pass the hat for donations, and someone suggested we send anything collected to Standing Rock to help the water protectors in their struggle. The event began to take form.

The 28th of November was a damp and dreary night in Lexington, Kentucky, and the UK Wildcats were playing on tv. I wasn’t sure what to expect for turnout, but the room was already filling at 7:30. I placed candles on the tables as promised, and the first band began setting up. The intent was simply for each singer or group to choose two Cohen songs, perform them in their own way, and we would hopefully move smoothly from one set to the next, working Nolan Dunn too hard as he skillfully modified the soundboard for each different performer.

The Northside Sheiks (photo above) started the night with their signature blues vibe, Willie Eames giving his style to Almost Like the Blues and Slow with Lee Carroll on accordion, Smith Donaldson on Bass, Robert Frahm on guitar and David White on drums. From there, the packed house listened to a steady stream of great Lexington area musicians: Chris Sullivan, Warren Byrom, Brian Combs, Bryan Minks, Keith Rowland, Doc Feldman (with a little bit of help from yours truly), Eric Cummins, Chelsea Nolan, Josh Nolan, Derek Spencer, Ben Aubrey with Trinity Curtsinger, Rob Rawlings and Alex Parkansky. And then came a duet on strings with Elias Gross on viola and vocals and Richard Young on Bass, which grew into a trio that added Anna Hess on violin to back Kevin Holm-Hudson on keys when he led the entire group in Cohen’s Hallelujah to end the evening. 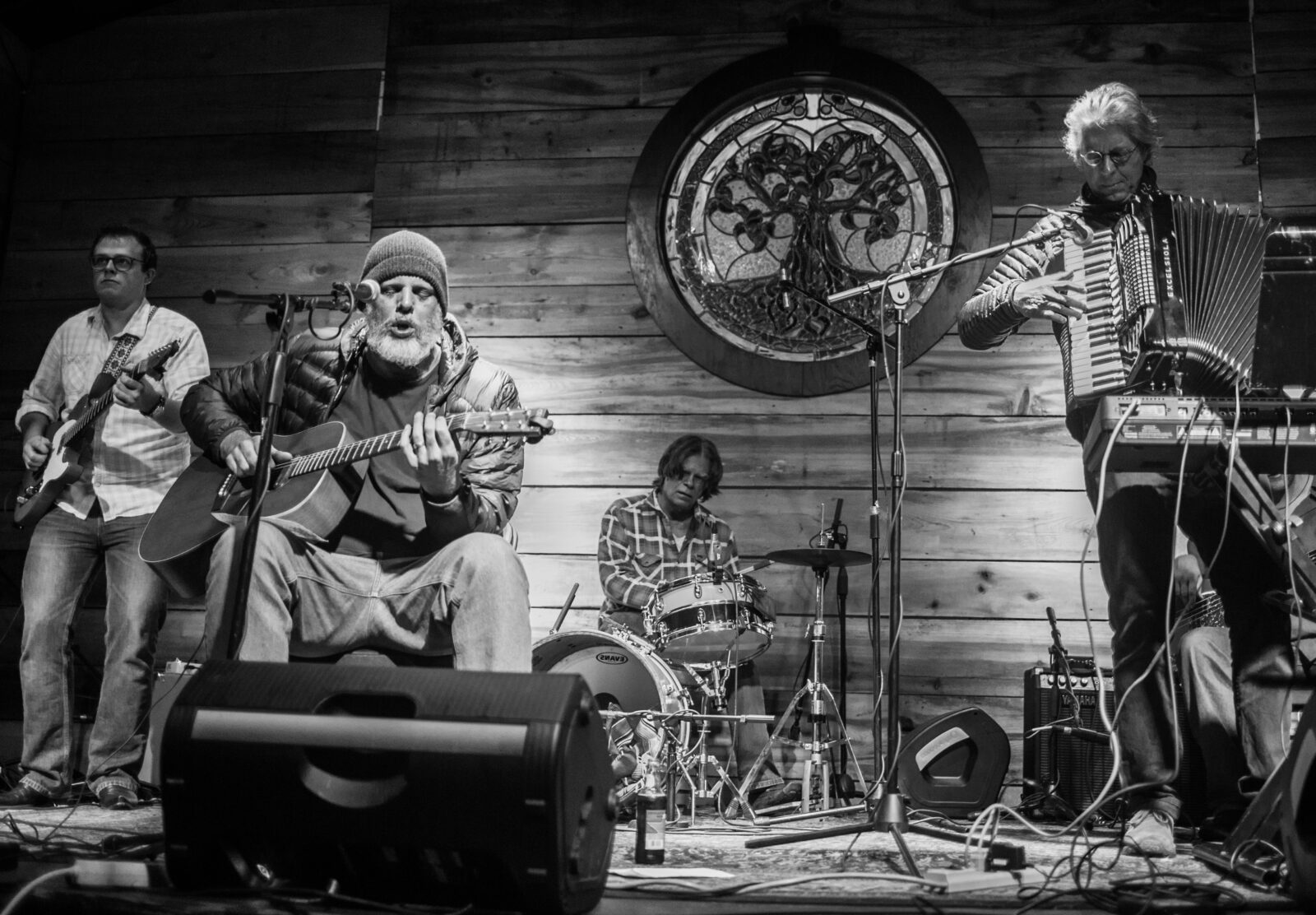 The night proceeded exactly as I had imagined it: candles flickered, people in quiet conversations between sets. When each performer began, the entire room hushed, even with the game on mute back at the bar. With the two songs they had chosen, each artist blended Cohen’s brilliant poetry with their own style and instrument to make it theirs.

“I’m always pleased when somebody sings a song of mine. In fact, I never get over that initial rush of happiness when someone says they are going to sing a song of mine. I always like it,” the late Cohen once noted in an interview on Pacifica Radio. “That song enters the world, and it gets changed, like everything else — that’s OK as long as there are more authentic versions. But a good song, I think, will get changed.”

He knew, of course, that his songs would live on. He even told us so in Tower of Song. Each artist or group of artists paid homage to Cohen that night, as candle flames flickered and the rain spattered against the windows. The Roll n’ Smoke food truck was parked outside, and the tangy aroma of barbecue floated through the Burl blending nicely with the fragrance of candles.

The audience was treated to a wide variety of genres as each artist individualized Cohen’s songs, piecing together the entire crazy quilt of the evening. From the Sheik’s blues interpretation to Bryan Mink’s Tower of Song with that country metal edge he has, to Chelsea Nolan’s booming vocals to Alex Parkansky’s drone metal guitar lifting Cohen’s music to surreal levels. Then the night went to strings, and the room, still nearly full even at 11:30 p.m. on a dark, wet Monday night, melted with the candles as all the singers took the stage once more to back Kevin Holm-Hudson in Hallelujah. 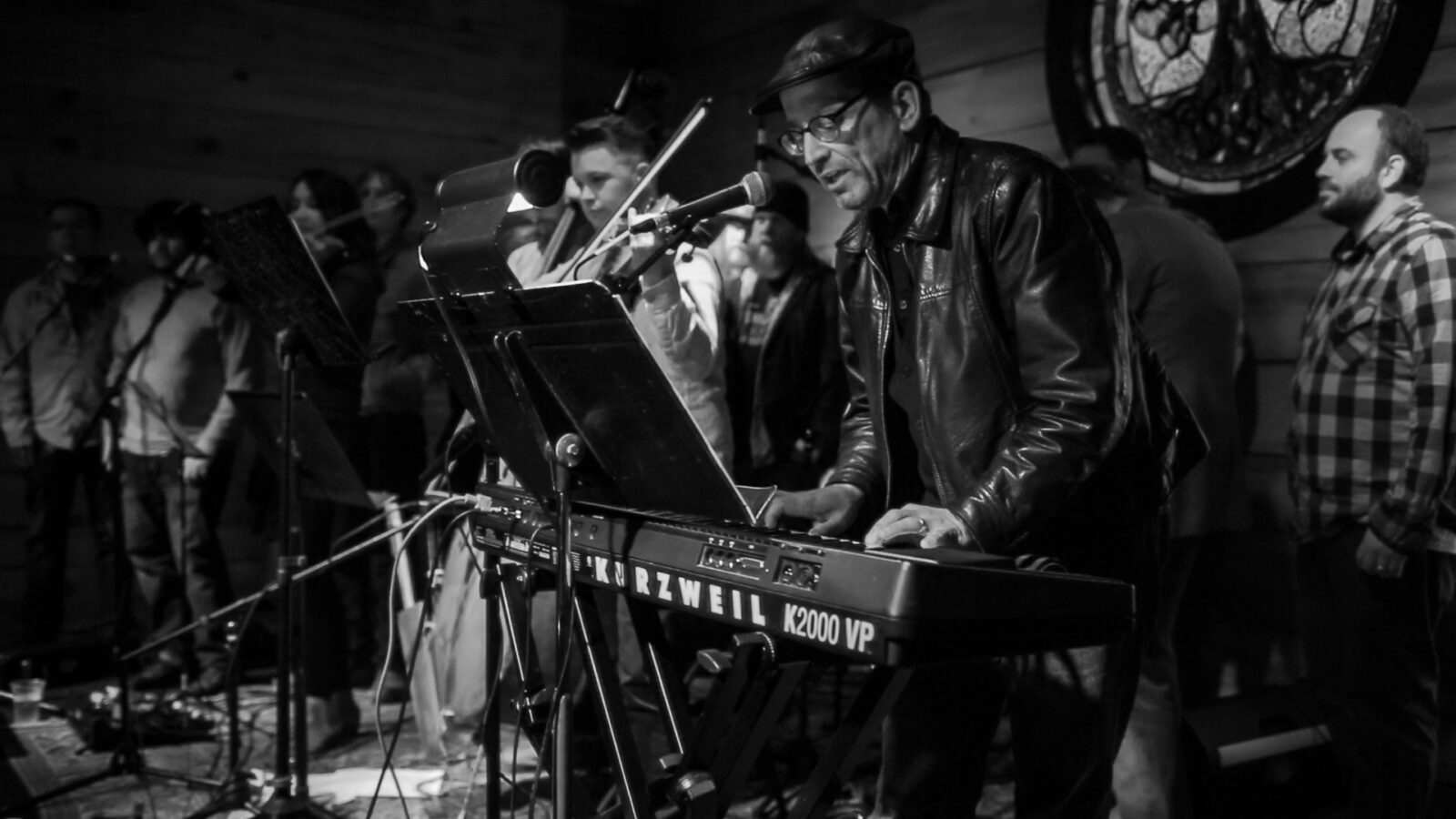 We all sang along, barely able to hold back during the verses as we harmonized into the chorus. I felt like I was in church again, the candle light blurring past the strings in front of us, the keys played perfectly as each of the seven verses guided us along. The crowd joined in too – everyone knows the words to this iconic song – and that room full of gorgeous wood and candles and people who simply love great musical poetry, that room rang with the collection of those voices. No voice was distinguishable from another. And then the last chorus was sung, and Kevin paused for just a moment of silence, and ended the night with those two words that took all our breath away: “Goodnight, Leonard.”

Folks were unbelievably generous all night long, and the money order to Sacred Stone is en route, along with a letter I wrote to the leader of the camp, Ladonna Brave Bull Allard.

I am so proud of Lexington. I am so proud of all the musicians who took the stage that night, who took the time out of their lives to learn new songs and perform them and support each other simply to do it. For the love of the music. To show respect to someone who devoted their life to creating beauty and art for others to love. And to share the effort in the form of charity, for others who really need some help right now.

Goodnight, Leonard Cohen. Thanks for the beauty, sir.

4. Brian Combs- The Butcher, Heart with no Companion

5. Bryan Minks- Tower of Song, Is this what you wanted

6. Keith Rowland- The Stranger Song, Bird on the Wire

7. Derek Feldman w/ Cara Blake Coppola- You Want it Darker, There is a War, If It Be Your Will

9. Chelsea Nolan- On the Level, One Of Us Can’t Be Wrong

10. Josh Nolan- Alexandra Leaving, Diamonds in the Mine

14. Alex Parkansky- The Future, Waiting for the Miracle