Born and raised in Iraq during multiple wars, Vian Sora produces paintings that highlight the impact of growing up in an environment where death and loss are everyday occurrences. Brightly colored, abstracted battlefields are riddled with representations of bodies; these paintings exude anger and sadness, but with hints of hope and change.

Vian maintains her studio practice out of Louisville, Kentucky. We arranged to speak over Zoom; as her camera focused, Vian’s studio came into view. She was surrounded by her paintings with overcast light pouring in from her large studio windows. Having just finished up a solo exhibition at Moremen Gallery, she was preparing for what she anticipated as her busiest year yet. The amount of work surrounding her, both completed and in progress, exemplified the energy and pace she was describing.

I first asked her about the work at Moremen Gallery for her exhibition What You Shout Into the Woods Echoes Back and how it was setting her trajectory for her work going forward. During our interview, I learned that Vian had just finished a three-month residency in Berlin, Germany. Not only did Vian’s time at her residency influence her work at the Moremen, but the timeframe in which she went to Berlin did as well.

During Vian’s time in Berlin, the city was slowly reawakening after closures due to the pandemic. Toward the end of her residency, the city saw life and people returning to it. Museums and galleries were opening again; Berlin Art Week had also returned. Vian was able to see thousands of works, including those of some of her “art superheroes.” This experience still had her fully charged. At the beginning of the residency, she was able to see the “bones” of the city, raw and empty without tourists. This let her get a better insight into Berlin and see the scars that are still present. Vian said, “As an artist or writer, you cannot escape the residue of emotions in Berlin, the history there, the detritus of war.” This significantly inspired the work Vian brought to Moremen Gallery.

Vian’s studio in Berlin was reached by walking through a park that offered an expansive view from the highest hill in the city. The emotion and physicality of that daily journey manifested in her work. What happened to Berlin in the past as a city had similarities to Baghdad, where Vian grew up under dictators for 29 years. Vian spoke about how Berlin represents the death rattle of a system that did not work and is now something new and powerful, representing freedom and growth. It is what Vian wants to see transpire in her home of Baghdad.

This amalgam of scars and healing, war and peace, death and rebirth, cycle through Vian’s work. Within the destruction and imagery of war scattered throughout her paintings, hope and joy spill through. Hope for a better future. Vian stated that her work is trying to “reverse the process of destruction into rebirth.” The pandemic gave Vian time to isolate, make work, and “face the demons in the studio.” The forced moments of silence gave her the space to reflect on her work. She emerged with a “fist-fight” attitude about her work, diving into regeneration, things we don’t like to talk about, recovery, life repeating itself, and rebirth.

The sadness and anger in her work are still present but, like a phoenix rising from the ashes, the other elements of hope and rebirth are there. This back and forth of contrasting elements, the waltz of death and rebirth, are palpable in her works. Vian shared that the bodies will always be featured in her work, a reminder of death and those lost to war. She said that the media de-personalized the deaths of her fellow Iraqi citizens by referring to them as bodies, or just a number, a cold statistic devoid of emotion and life. That de-personalization informs much of the visuals in Vian’s work. She may create an explosion scene and include the bodies in the image, but this acts as an effort to bring life back to those lost, to give them back the humanity that history and the media strip from them. Vian does not want to forget those lost and the trauma of that loss, and she believes the world should not forget either. When talking about this she brought up a personal anecdote. Vian’s father owned a gallery in Baghdad where there were three car bombings near that space. Twenty people died that day, and the next day people were cleaning and moving debris. She was really drawn to people’s will for survival and life, which is fascinating, beautiful, and tragic. Vian went on to say one cannot rationalize violence of this magnitude, so we have to stick to the day-to-day, the survival aspect of it. Her work reveals this and the things she cannot always say, the reality of violence and war.

Vian and I finished up our conversation talking about working out of Louisville. She decided to be a Louisville artist because she has a voice there. We discussed how it can be so easy to be lost in a sea of artists and makers in large cities like New York, Chicago, and Los Angeles. In smaller locations, it can be hard to get momentum or know where to start, but once momentum grows it is so much more purposeful, and the energy generated in these communities is astounding. Vian gets angry when folks call Louisville (and other places like it) “flyover spaces”, as there is a fantastic arts community there. Her new work touches on being an Iraqi artist in Louisville. Vian likes that her studio is surrounded by the energy of new and young artists who are excited and making work.

The topics addressed in Vian’s work and practice are deeply personal to her history but at the same time universal in how they relate to what we as humans have faced in our world historically and today. The impact of loss and grief and rebirth, honoring those lost, and calling attention to the way we navigate violence, are present in her work in a way that can resonate with so many. For the artist conducting this interview, talking with Vian was an enriching experience that, like her work, was filled with tonally heavy topics, but always with growth, healing, and hope present.

To see more of Vian Sora’s work, check out these venues:

Top Image: Vian Sora, Riverbed, 2022, mixed media (acrylic, pigments, finished with oil on canvas), 72″ x 96″. An abstract painting that is largely yellow, orange, and green on a blue background. A shape that resembles a figure is in the bottom left corner of the composition. Courtesy of the artist. 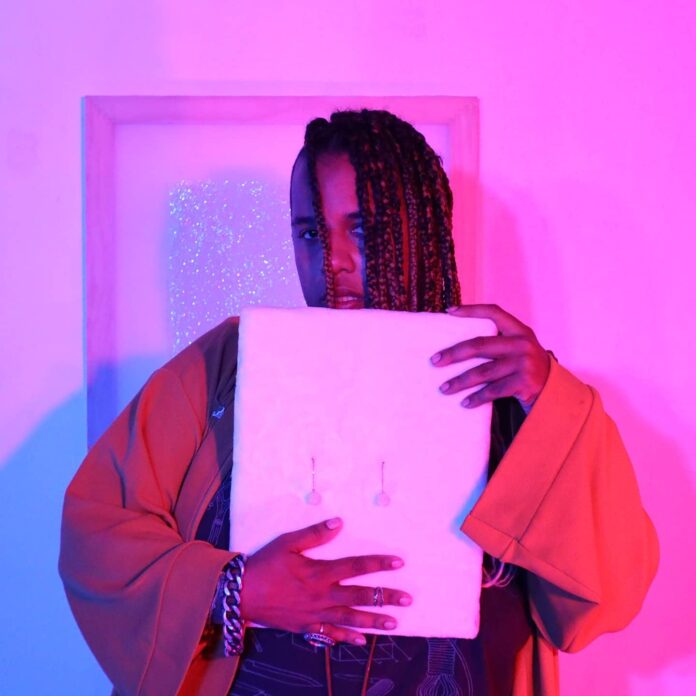 Alexander Martin
Alexander Martin is an artist living and working in Peoria, Illinois. Co-founder of Project 1612, an independent art space and short-term residency program. They make work dealing with the intersection of their queer and black identities. Follow them on Instagram: @xander9210 or Project 1612 @Project1612.