The Art World After COVID and After the Murder of George Floyd. In Poem and Prose.

You can’t say much about the art world
That can’t also be said about the world.
Both are being hurled into a trajectory
New, untested, unimagined until now.

Like Charlie Brown, you have to face
Adversity with philosophy, insanity
With unity. Like the bard said, you
Gotta be tough. It helps to be in
Fighting shape when the weather
Gets this rough, this windy, this in-
Dependent-bookstore-spindly. Songs
Of canaries dot the landscape in rhyme
With each other as they slide towards the
Rapid decline. Some have resources, some
Have hope, some have enough dope for two
More days if they’re lucky, three if they’re not.

I had a studio in a gallery, Gallerie Soleil, in the
2000’s, teaching myself to paint after a print-
Making major and a stint as an art director
For local TV. This last frisky decade came to
A close on my own public studio & gallery,
Homegrown Press, where the occasional
Blocks were carved, prints were printed,
But mainly I painted paintings, trying to
Keep them all real enough while selling
Enough to keep the doors open, always
Hoping someone would walk through in
Time to pay my rent for me, with no new
Enemies, and as often as not it has worked,
But only online, social media sharing my work,
Connecting with and selling to souls from coast
To coast, Sight unseen, not laying my eyes on them,
Nor theirs on my pieces, except in an email, but my doors
Stayed open, if only for the occasional critique by the home-
Less (Old School was almost always right, and in fact, the piece
Of mine that upset him so, never sold, and it cost me my studio,
That and the virus that took all the restaurants and bars and my
Sweet buddy Carleton), but the main reason I kept that open sign
On the door, to welcome the occasional child/artist that would
Would walk in with a donut and a sibling, parents looking around
The crazy place with its murals and messes and giant rough easels.
The parents would raise a skeptical eyebrow at each other, or they

Would register nothing at all, but sometimes a child’s eye would rove
The gallery and the noise, the brushes and rollers and ink, and I could
See on their face the look that says “I have found my people. I could
Maybe do this.” And I would reply to them with a corresponding
Expression on my face, “If you want to, you should. It’s good.”
Maybe Old School was right about my piece, “Rat King.” And
Maybe he wasn’t. Time will tell. For now, I have carried all
Of my belongings home, one old truck full at a time, all
By myself, during quarantine, easels and tables, inks
And my press, books, magazines, slabs of old marble
And plywood and carved blocks, carving tools, brayers
And brushes, nails, screws, tools, lightbulbs and big ideas.

What didn’t fit in my music room, with the drums, guitars and
Keyboard, was relegated to the basement, where just last week
I had to go through it all again when our basement flooded, saving
Boxes of framed prints and canvas and paper. I had planes flying in
The air, in the clouds, then they were grounded and I had to retrofit
A tiny airport, and try to fling them aloft again. I’ve had help. Oh yes,
I have had help. Unemployment paid the back rent I owed on my now
Defunct studio. My wife has a good job as a medical administrator. We
Will be fine, there are many people in much more dire straits than are
We. And now that restaurants are decimated, and sports television
Echoes only its innocent past, people sit at home and have time
To watch as the world turns and the edges of cities burn, and
Our children empty into the streets to demand racial justice,
Racial equality, an end to the crushing status quo, and they
Can see much more clearly than we ever have, we are
All just people. The system is getting a much needed
Overhaul. The world is crushed and compacted and
The people try to hold on, much like the art world.

And, much like the art world, I imagine that the
Upper echelons will continue to be just a little
More bullet-proof than those creative folks
On the ground, in the trenches, making do. 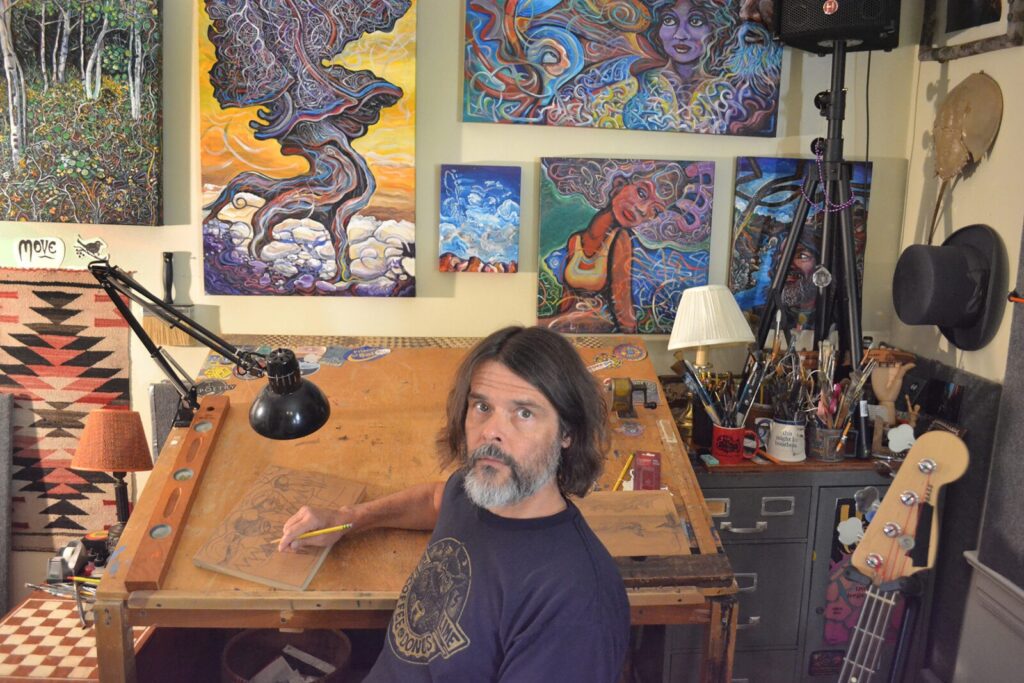 BACK TO THE DRAWING BOARD

2020 marks 10 years that Homegrown Press Studio & Gallery has been located on North Limestone at 6th Street, in Lexington’s NoLi district. 2020 also marks 30 years since I met my wife and organized my gypsy screen-printing endeavor into Homegrown Press. There was to be a celebration September 24th, my late father’s 76th birthday. My band (okay, my son’s band) was to make their debut on the little wooden stage, and I would have new paintings, block prints and T-shirts for the occasion.

Instead, faint murmurings of distant illness gave way to a couple weeks of social distancing which have, in turn, become a new way of life. And death. People stopped buying paintings (not forever). Coronavirus ended my much-needed lunch dates with artists, writers, and misfits, and took our sweet friend Carleton. Then fate took two more friends to whom I owed much more than was owed to me.

The regular stress and anxiety of studio overhead became too much when compounded with grief, loss and uncertainty. I had been putting together a modest 13 x 18 foot music studio in our house, a place for our band to practice, maybe cut demos. It would now have to do double (triple?) duty. I gave notice to my NoLi landlord and brought home everything from Homegrown: press, stand, inking table, easels, drafting table, filing cabinets, canvases, paint, brushes, ink, paper, frames, tools, lamps, carved blocks, uncarved blocks, knives, pencils, pens.

It has taken a few months to find a place for everything, but I have successfully integrated the printmaking and painting equipment into the music studio without disturbing the band’s footprint too awful much. I’ve had to get creative. I am now back to painting, working on a couple of promised commissions, and some surreal little paintings for my nieces and nephew in Oregon, whom I miss. Songs and poems are popping out occasionally, but the space to paint in is limited, and my paintings have become too expensive for most of the people I know. Times change, and it is time to get back to the drawing board. Or the carving table.

For the first time in the 20 years that I have been learning how to paint, I will again be working in reductive method block printing. While more physically and mentally taxing than painting, it will be a more democratic endeavor, and more affordable. Multiple prints of each design will be made, and the number produced in each edition will be limited, since the block is destroyed during the reductive process. I will miss having a public studio space, but the main reason I had an open sign on the door was so kids whose families happened to wander over from the donut shop could see an artist just being an artist. I really could have used that example as a kid.

Like I said, times change. Human beings can be very adaptable when circumstances demand it. And circumstance is knocking. It knows we are home. Coronavirus. Unemployment. Stress. Fear. Loneliness. Then George Floyd. Breonna Taylor. Marching. Signs. Fires. Smoke. And marching out of that smoke and into the light? The many thousands of protesters who, day after day and week after week, are taking back the power, in dogged pursuit of justice, truth, and unity. I acknowledge this is a crisis for individuals who have lost loved ones, jobs, businesses. But what we are seeing is the beginning of a huge recalculation. The timing is horrible. The timing is perfect.

The world is preparing to get a little more creative. I am not really familiar enough with the art world at large to be able to respond to the Last Days of the Art World article by Jerry Saltz in any substantive way, other than to say what it has been like for me. I hope every artist and arts organization that operates from the heart can survive and thrive, from the largest museums to the weirdest little galleries, studios, venues. I have been shaken from my particular tree, and like a squirrel, I only hope to land with a little dignity. Time will tell. And Black Lives Matter.

John Lackeyhttp://www.homegrownpress.com%20
John Lackey is an artist, printmaker, poet, and musician. He lives in Lexington, Kentucky.