The Structure of Images: Alfredo Jaar at MCA, Chicago

The Structure of Images, a moving exhibition of five works by the artist, filmmaker, and architect Alfredo Jaar is currently on view at the Museum of Contemporary Art (MCA), Chicago. The selection spans thirty years and illustrates Jaar’s ongoing impulse to understand complex social and political issues. Jaar’s work asks us to consider the politics, ethics, and power dynamics inherent in the torrent of images we consume. His process is slow and methodical, and always begins with a real-life event he feels compelled to respond to. Using photography, mirrors, dramatic lighting, and mise-en-scène, Jaar “obscures, reveals, and highlights his subjects” in this small but impactful exhibition.

The work R, which is installed on a curved wall that encloses the gallery, shows Jaar’s approach to art as architecture and what he calls his “Cartesian thinking.” An oversized light box is installed on the floor and houses an image that is unseen until you approach the box. Six small circular mirrors hang on the wall in front of the light box in the dimly lit, intimate space. As you get closer to the wall, the bottom mirror reveals the cropped gaze of a woman. In the mirror above is your own reflection, looking down on her. A highly rational (but not unfeeling) logic organizes the work. Nothing is incidental. Jaar’s vision has an exacting precision, where the idea takes precedence over the pure aesthetics of the work. But within this, Jaar uses the formal qualities of art and the mechanics of photography – lighting, cropping, tricking the eye – to control the shape of the narrative.

Like all of the other images in the show, Jaar did not take the photograph in R. It is a picture he purchased the rights to of an unknown Ethiopian woman, taken at a refugee camp in Sudan. In this work, Jaar makes the viewer complicit in this woman’s distress and erasure. He adds empathy to what could be a buried or sensationalized news headline. R closes the gap between us and them and does what so many of Jaar’s works do: it upends the visual hierarchy and coherence that we expect from images. Jaar shifts the emphasis and reframes the conditions of visibility so that this woman is not just an object of pity.

Jaar’s practice also takes advantage of the empowering possibilities of the image. This is seen in three works on view from his series A Hundred Women, an ongoing project focused on female activists around the world whose achievements often go unrecognized. The three women featured in this iteration are Nawal el Saadawi, an Egyptian activist and physician, Shada Nasser, a Yemeni human rights lawyer, and Camila Vallejo, a young Communist Party politician in Chile. In the darkened gallery, the wallet-sized portraits hang in the center of three walls, each spotlighted and surrounded by a crowd of paparazzi-style cameras on tripods. The cameras could easily dwarf the small portraits, but the arrangement of light and space gives the women a place of distinction. Commenting on the series, Jaar told Artnet News: “In all my daily research, I encountered these extraordinary stories of extraordinary women doing extraordinary work. I thought I should do something about it because so few people are informed about them.” But the work does more than simply inform; to see the portraits, you have to get very close to them. This removes the physical distance between the viewer and the subject and creates space for communion and reverence.

The first (and last) work you see in The Structure of Images is Life Magazine, April 19, 1968, which is located just outside the small fourth-floor gallery that contains the other works. It is an eloquent capstone to the exhibition. The triptych, recalling the form of an altarpiece, shows a photograph of Martin Luther King, Jr.’s funeral procession (taken from Life) and two diagrammatic examinations of the scene. The center print shows black dots over the photograph – each representing a Black person in the scene – while the last print shows red dots, which are stand-ins for every white person there. The work highlights the racial disparity of those who showed up to mourn Dr. King. Jaar seems to ask, accusingly – isn’t this a tragedy for all of us? Jaar made this work partly in response to moving to the United States from his native Chile in the early 1980s. He was shocked by the depth of racial disparity he encountered. The triptych is a simple, even analytical work, but deeply sorrowful in its matter-of-factness. It is difficult not to view this work in the context of where it is on view, in one of the nation’s most racially divided cities. Geographically, this disparity exists largely along a North-South divide in Chicago, just like it does globally. You could consider this a dilemma of visual hierarchy; such an idea has been suggested in things like the South-up map and is even a concept that Jaar has explored in his own work.

I do not live in Chicago now but when I did, people would ask questions like: “Is it safe?” “Aren’t you scared?” “Have you ever seen anyone get shot?” I heard these anxious concerns from friends in faraway cities, and co-workers who tracked crimes in real-time through apps on their phones. I would always become frustrated by these impressions of Chicago – that’s not really how it is, I’d tell them. But really what I meant was – that’s not really how it is for me, in the relatively safe, white neighborhood I lived in on the North Side. I too was complicit in erasure, avoidance, and over-simplification. The structure of images depicting Chicago has both failed and succeeded in portraying how it is. This is how Jaar often describes his work, too – often a failure, but also a necessary exercise in trying to make sense of things that can’t possibly make sense.

As of Christmas, Chicago hit its highest yearly homicide rate in nearly thirty years. Over 90% of the deaths were the result of gun violence and over 90% of those that died were Black or Latino. The Chicago Sun-Times provides a rolling “Homicide Tracker” and “Victim List,” but information alone – color-coded charts, interactive maps, expertly designed graphs – are not enough to humanize these statistics. This is something we’ve all learned during the pandemic. So what is to be done with this information? How do you represent a tragic injustice – one that unfolds right in front of your eyes, every day, slowly, for years and years? Isn’t this a tragedy for all of us? To quote another one of Jaar’s works: “Tonight no poetry will serve.”

In 2007, Jaar told Art21: “There is this huge gap between reality and its possible representations and that gap is impossible to close. Artists have to try different strategies of representation [to] create empathy, solidarity, and intellectual involvement.” Jaar knows the limits of both information and art. He accepts that there is a certain futility in creating politically and socially conscious art, but that it is also sometimes the only way to understand and process catastrophe.

In a 2020 interview with the Smithsonian Archives for American Art, Jaar was asked to describe his experience of the pandemic thus far. He said: “…it is difficult to talk about something that is happening now…we are in the middle of a crisis in motion.” Jaar is somewhat of a rarity, an artist whose work should be consulted, often, for guidance. So much of the media and news that we consume seeks to respond to the immediate moment, with the fleeting hope that their fast-take will age well. This can be said about a lot of contemporary art, too. We will likely have to wait years for a meaningful summation, in art form, of what we are currently living through. Once we’re given the opportunity to try and make sense of this “crisis in motion,” Jaar will be an artist to look to.

Alfredo Jaar: The Structure of Images is on view at the Museum of Contemporary Art, Chicago, until July 22, 2022. https://mcachicago.org/

Photographs of exhibition by the author. 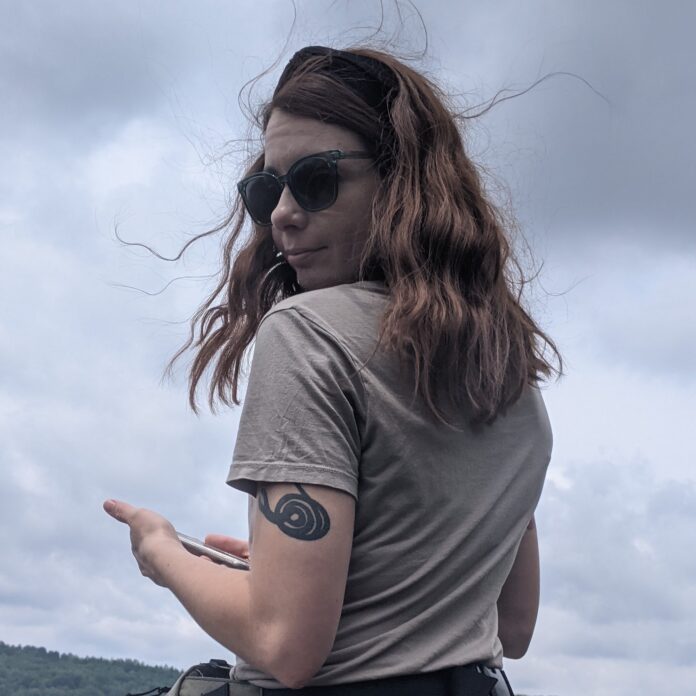 Ely Maris
Ely Maris is a writer and curator from Chicago, currently based in Lexington, KY. She is an MFA candidate in Curatorial Studies at the University of Kentucky. She researches archives, collage and performance-based art.